And there came one of the seven angels which had the seven vials, and talked with me, saying unto me, Come hither; I will show unto thee the judgment of the great whore that sitteth upon many waters:  with whom the kings of the earth have committed fornication, and the inhabitants of the earth have been made drunk with the wine of her fornication.   Revelation 17:1-2

On August 8, 2015, Steve Quayle issued a Q-Alert stating, SHEILA ZILINSKY IS OFF THE AIR DUE TO LACK OF FINANCIAL SUPPORT,WOULD THOSE OF YOU BLESSED BY HER MINISTRY PLEASE HELP HER FINANCIALLY.  Considering how much promotion she has received from the Hagmann/Quayle inner circle, I was surprised by this notice.  I first discovered Sheila Zilinsky when Doug Hagmann introduced her Weekend Vigilante radio show as the Saturday counterpart to his program.  During that time,  she also helped fill in on the Hagmann & Hagmann blogtalk radio, if one or both of the hosts were not present. Later, she went out on her own, sponsored by Steve Quayle.

Sheila Zilinsky has posted some badly photo-shopped pictures of herself on the internet in which she displays her forty-something face as an overly made up whorish looking woman.  I showed her photos to my husband, and asked him what his immediate reaction was.  High Maintenance was his answer.  Her original cartoon picture of herself as the Weekend Vigilante, shows her in a sexy backless dress, holding a gun in a seductive manner.  When I perused the internet under her name, there were numerous men who made comments to her shows, Facebook account, and Tweetings that she is “hot”, or should have worn a bikini, etc. It is highly curious that the pastors with whom she associates with, such as David Lankford and John Kyle, have not been pastoral enough in exhorting her to appear as a more modestly dressed Christian woman.  Steve Quayle has said that he finds her amazing.  Perhaps her seductive charms are indeed very enchanting to certain men.

My husband’s comment that Sheila Zilinsky is high maintenance would seem to be true in more ways, than just the cost of keeping her face from melting on a warm day.  She lives in Kamloops, British Columbia, and the newspaper there reported on Zilinksy’s complaint about parking meters in 2013. What is interesting about this incident is how much money she wasted, when she had her own private parking space at her apartment.  Her accusation that she was personally targeted for tickets and towing, and her demand that the city council pay her tickets was unreasonable, in light of the facts.

One day prior to her running out of money for her radio program, she was featured on the John B. Wells July 31, 2015 Caravan to Midnight radio program, episode 330.  The write-up given her is that Sheila Zilinsky  was once “a former high level government executive for the Ministry of Environment”.  Oh, no, not another government employee insider like Hagmann, Deyo, or W.  John B. Wells goes on to reveal that Sheila in 2007 “discovered confidential information that lead her to speak out against the fraud of anthropogenic global warming and the entire green agenda.”  I guess we will just have to buy her newly released book the Green Gospel. If you look on the back cover, you will see her latest photo of herself revealing true intellectual capacity.  She modestly says about herself, “Sheila Zilinsky, a former government top advisor, is an internationally recognized radio host, author, and minister.  Her radio broadcast ministry reaches the four corners of the globe.  She examines news and world events from a biblical worldview.  She was touted by Vancouver media as “the only woman in talk radio with a titanium spine and a heart of gold”.  Too bad that she did not tell John B. Wells that her show was going off air the very next day because of lack of money.

Now why is it that these former government employees never define their exact job title and period of service?  Was she fired for disclosing confidential information, and had to sign some sort of departing agreement?  Sheila Zilinsky does have job skills, although her stability seems to depend on not telling you all the facts of her own employment history. She once did a voice over for a car commercial.  And I see that hotfrog.ca shows that she also has worked at Balanced Solutions, a” coaching and consulting group, helping people who are seeking life change”.  Their ad claims that “Sheila Zilinsky is a certified Life Coach who helps people who are feeling unmotivated but want to live their best life”.

I came across a webpage called the appearance.com.  This site uses the word appearance as an acronym for “the Apostles & Prophets Preparing the Emerging Army Releasing the Abilities & Natural Calling of Everyone”.  If you scroll down through the photos of their church services, you will find a paragraph which reads, “On Saturday night, we had another great move of the Holy Spirit in the meeting.  That night we shared a message titled, The Power of God was Present to Heal”.  Many people were healed and set free as the intercessors gathered around the altar and began to minister to the people.  This was one of the most powerful services we have ever had in Idaho.  Sheila Zilinsky from the Weekend Vigilante who is used in deliverance ministry by the LORD, was present at that service and helped us minister to many of the sisters that were there.  There was a strong angelic movement in our midst as a couple of children saw many angels moving about in that service”. 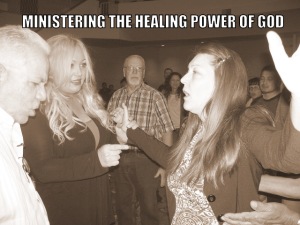 Sheila has interviewed both Pastor John Kyle, who was also present at the Whitestone Remnant Conference in Montana, and also Pastor David Lankford regarding the topic of healing and deliverance. Kyle says that he never met a Christian who did not need to be delivered of a demon. Now, I do understand that there are persons who are so enslaved to sin, that they do indeed need the help of another person, preferably one who has the Christian’s authority in freeing them of devils.  However, once a person is saved by faith in Jesus Christ, it is sufficient for that person to turn to the Lord for help in overcoming personal problems.    For most new believers, their primary problem is overcoming their false theology which was taught by the world, and replacing it with correct doctrine.   This takes time and study and prayer, and cannot be solved by some deliverance ministry which claims instant success.  The last thing any Christian needs is a High Maintenance devil laying their hands on their head and taking authority over them.

One of the aspects of the Hagmann/Quayle inner circle is that they flatter each other to high heaven.  One of their favorite words to describe their own motives, is that they are Pure.  The worst friends a person can ever have are those who will not reprove you when you are wrong. All of the men of this group who are religious, or are/were in pastoral positions do not seem to care about the soul of Sheila Zilinsky. Perhaps  she was chosen to play the part of the Great Whore riding the Beast.

To those who wonder about the title of this post, it should be noted that Meroz is the chief prince of the house of freemasonry, as well as the archangel/master of the Order of the Leopard.  They have a goddess who is a black leopard.  This does not reference outer appearance, but the darkness of the inner soul.  Luke 11:34 says, “The light of the body is the eye: therefore when thine eye is single, thy whole body also is full of light; but when thine eye is evil, thy body also is full of darkness”. Not only do all people need to guard themselves against the theology of devils, but women need to guard themselves against the pressures of the world to play the Whore.

Notice of The Poor Man’s Copyright

Jacquelyn Weaver is the author of the Tracking the Leopard Meroz blog, which began on March 17, 2013. Unauthorized use and/or duplication of this material without express and written permission from this site's author and/or owner is strictly prohibited. Excerpts and links may be used provided that full and clear credit is given to Jacquelyn Weaver and trackingmeroz.wordpress.com with appropriate and specific direction to the original content.