Once upon a time in a faraway kingdom, the Grand Master of the Order of the One Star Monktel was challenged by an Old Man. 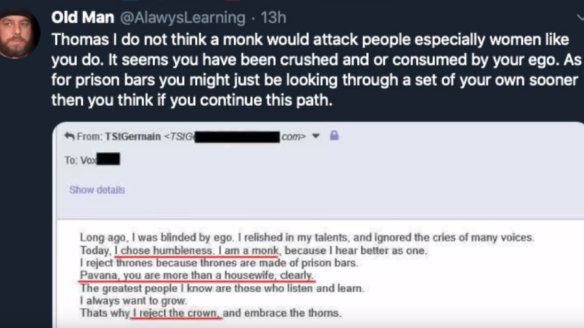 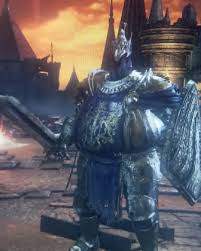 Thomas Schoenberger, the Grand Master of the Order of the One Star Monktel

TStGermain is Thomas Schoenberger, who in recent months has been hiding out from one or more process servers. Rejecting thrones because they are made of prison bars, he endeavors to stay only at One Star Monktels that lack a throne room.

Of course this Grand Master Knight once had a Maid Marion to make his bed and empty his ashtrays.  Known by the internet handle,  Elizabeth Vering, she devoted untold days helping the Grand Master to fight against the big baddies with millions and millions of dollars and all the common thugs money can buy.  But then this maid found herself  being ignored, as the Grand Master turned his attentions to a fellow knight in expandable armor, the Cryptobeast.

Rumor has it that one day the Grand Master was reading burnerafterreadingmag.com when he spotted this Danger Ranger comment shown below.  It was like reading the Help Wanted Column, only to discover the opportunity of the century!

Who needs a Maid Marion, when the Cryptobeast has scores of them?

So on January 18, 2020, Elizabeth Vering produced a video called This Is How It Ends. 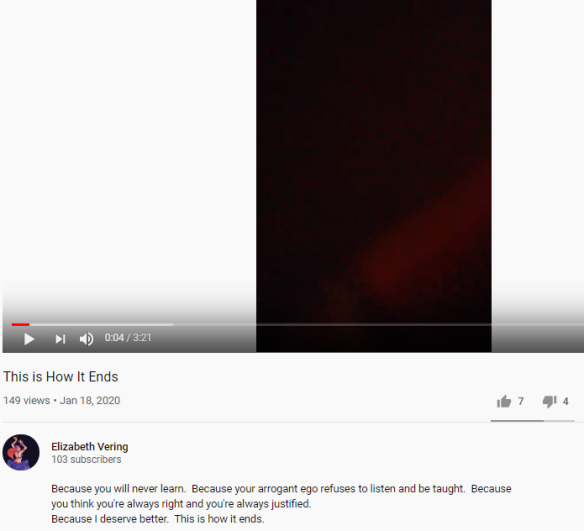 In a now deleted comment below this video, Elizabeth Vering wrote these heartfelt  words: “Breaking up with the head of Cicada 3301, the last surviving member of the original three founders, two retired spooks and one Silicon Valley tech.  It’s been an exciting ride.  Never thought I’d ever save somebody, or sign up for anything I had a really good chance of dying over, and that I would think was actually worth it.  But it’s amazing what happens when you’re in the right place at the wrong time and fall in with a group of weirdos on the internet.  Never thought that tiny little me would be fighting real monsters, bid baddies in the intelligence community or who have millions upon millions of dollars, and all the many common thugs money can buy.  Maybe I still can somehow, but not out of any sentiment for that man, and not his battles.”

The Elliptical Universe of the Grand Master and the Cryptobeast

Most target shooters practice hitting a bullseye in a perfect circle, and develop an instinct for knowing where the centerpoint is. Trap and skeet shooting involves hitting a moving target that has a parabolic path affected by gravity.  But an ellipse shape  presents a different challenge because there are two focal points which serve to define its perimeter.  Move the two focal points, and the shape of the ellipse also changes.

The screen shot I show below illustrates a method of reputation destruction employed by two persons working together in an elliptical relationship.  This example was recently displayed in Dave Sweigert’s SDNY.ORG’s “Manny’s Moot Court”. 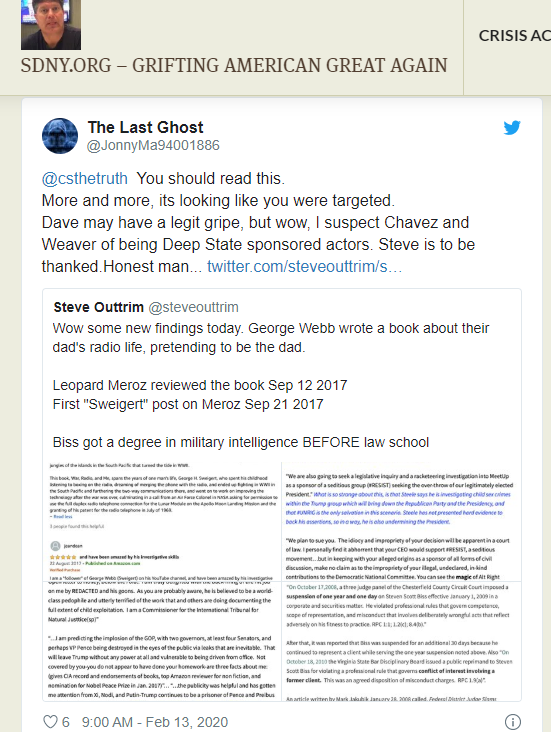 In this example, the first focal point of the ellipse,  Thomas Schoenberger aka The Last Ghost, sends a Twitter message to CStheTruth aka Jason Goodman of the Crowdsource the Truth YouTube channel.  Apparently Schoenberger wants to feed into Jason Goodman’s paranoia that he was set up by an organized group of Deep State sponsored actors.  The motive behind this message is to find another person who will mutually target Schoenberger’s adversaries, Manuel Chavez III and Jacquelyn Weaver. His only “evidence” is a nonsensical  Twitter message from the second focal point of the ellipse, Steve Outtrim.

Steve Outtrim’s Twitter message mentions “new findings”, which represent two old articles, written nine days apart in 2017 by Tracking the Leopard Meroz.  The first thing to note is that the book review I wrote back in 2017 was removed from my blog, probably about a year later, because no one was interested in reading it.  I regularly cull posts about once a year that have become irrelevant. So either that post was found on the Wayback Machine, or someone has been keeping a detailed record of my articles going back 30 months.

The other article noted by Outtrim is Operation Whiplash which was an unflattering critique of former CIA officer Robert David Steele. How that critique proves that Jacquelyn Weaver is Deep State CIA, I have no clue. Outtrim says it was the first “Sweigert” post on my blog, but he does not clarify which Sweigert he is referring to, or what his point was in referencing two unrelated articles.

Steve Outtrim claims that Thomas Schoenberger provides evidence, and his detractors do not.  Time after time, Steve Outtrim has been proven wrong by various persons seeking to publicly correct the defamation which has been committed against their reputations. With regard to the screenshot displayed above, I will make 2 main statements:

*** I have never communicated with Manuel Chavez III, and have no association with him whatsoever.

*** Schoenberger has slandered and libeled my name, as well as my family, in his Twitter accounts and on his YouTube channels, including his most recent one, CoronaVirus Updates. He has spread falsehoods, using the hypothetical question method, that my family’s publishing business was associated with the CIA-Operation Mockingbird operation.

My family published a weekly newspaper for over 50 years, out of the my grandmother’s basement. That newspaper was started by my uncle when he was 14 years old, and the advertisers which he first had, remained loyal for over a half century because of the integrity of my family.  Operation Mockingbird was interested in large newspapers, not weekly newspapers that printed only local news.

My father won countless first place awards among Washington state weekly newspapers, for editorials and photography.  The two local daily newspapers, the Seattle Times and the Post Intelligencer had a policy of hiring any writer who had worked for my father because his reputation for quality journalism was well known.

Prior to the Civil Rights Act, my father wrote editorials in favor of “open housing”. As a result, someone burned a cross in my grandmother’s yard, and we received death threats and curses.  Yet Thomas Schoenberger dares to slander and libel my family, while he sits in darkness, hiding out as a coward, fearing to give an account for his public statements, which are oft done under anonymous names.

I have never worked for the government, other than being a taxpayer which funds its operations. My father was self-employed his entire life, and worked as a teenager to help support his parents. Even after retirement, my father continued being productive, assisting others to publish small newspapers. I come from a hard working, middle class family, that never defrauded anyone.

This month I was preoccupied with filing a report with the FBI on an anti-government individual.  In addition, my husband had two surgeries, and there were other situations that occupied my time.  As a result, many of the slanderous statements that Schoenberger made about me, that I am CIA or into black sorcery, were only noted by me in the passing.

In hindsight, it appears that the article I wrote about the Canadian lawsuit, Gabe Hoffman vs. Zach McQuaid set off a flurry of veiled threats and falsehoods.  Reviewing the totality of that reaction from Thomas Schoenberger, Steve Outtrim and others opposed to Gabe Hoffman, I am beginning to see the manner in which this group attempts to entrap anyone who reproves their reputation destruction activities.

On February 24, 2020, Esteban Trujillo de Gutierrez wrote An Appeal to Steve Outtrim,on his magickingdomdispatch. com website.  At the beginning of this appeal, Trujillo posts the following screenshot: 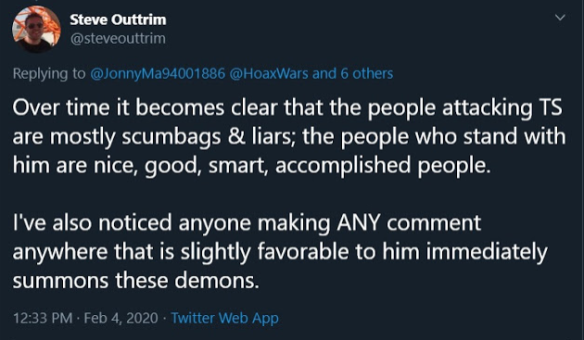 Tracking the Leopard Meroz has always had a liberal comment policy. That liberality is now being withdrawn.