Whenever I research the topic of the Sovereign Citizen Movement, I often run into familiar names, such as Field McConnell of Abel Danger or Robert David Steele, who have associated themselves with the pseudo-legal philosophy of the fake Alaskan “judge” Anna Von Reitz and the Victurus Libertas website who are “unveiling the Freedom Revolution”.

About two and a half years ago, Field McConnell had interviewed Anna Von Reitz in a September 15, 2016 Abel Danger video.  And when I wrote a January 19, 2018 article, The Context, The Whole Context, and Nothing But the Context?, which discussed who was promoting the website Victurus Libertas, I noted that Field McConnell’s name was mentioned in the membership fees Gold Level- Insider Engagement as shown below: 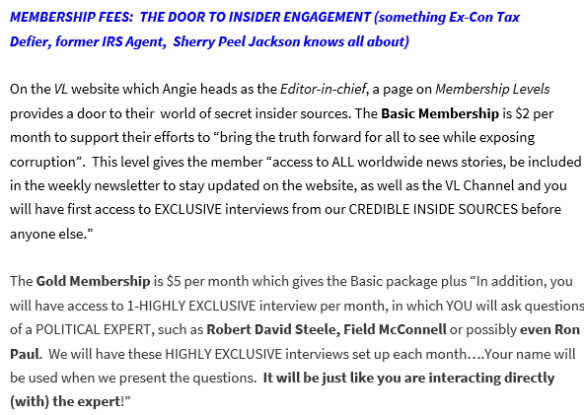 Victurus Libertas also had interviewed the fake Alaskan judge Anna Von Reitz, and was selling products associated with Sherry Peel Jackson, a former IRS agent who went to jail for 4 years as a Tax Protestor.  So by being an inside political expert enticement for the Gold patrons of the VL website, Field McConnell is by inference also supporting the Sovereign Citizen philosophy this website promotes.

[As an aside, I had also written on Robert David Steele’s association with Sovereign Citizen concepts in this September 16, 2018 article, THE OATH Above All Oaths of Robert David Steele, Chief Counsel for the International Tribunal For Natural Justice.]

Field McConnell has loosely attempted to engage the American court system for his purposes as far back as 2007, when he filed amateurish handwritten complaints in the U. S. District Court-District of North Dakota.  The first lawsuit,  Field McConnell vs. Boeing Company and Air Line Pilots Association was filed February 27, 2007 [link:field mcconnell boeing alpa 2007], and the second,  Field McConnell, David Hawkins and 98 fellow plaintiffs vs. Global Guardians listed in “Preamble” was filed May 1, 2007 [link:  field mcconnell global guardians lawsuit].

Both lawsuits failed for lack of prosecution, as apparently the plaintiff(s) never served the defendants.

In 2016, Field McConnell was involved in divorce proceedings in Wisconsin. We are going to look at certain aspects of this case, as he attempted to make use of several  sovereign citizen paper terrorist tactics.  The two documents under discussion in today’s post can be located here:  [Field McConnell affidavit of truth 2016 ]  and [Field McConnell divorce 2016 ].

First, in viewing these documents, I am not going to be addressing who is right and who is wrong as far as this dispute concerns a private divorce judgment; however, it needs to be noted that a dispute arose because the Petitioner, Alison McConnell, had asserted that Field McConnell had not made certain maintenance payments, real estate tax payments, and provided proof of home loan payments or homestead insurance payments.  The attorneys for Alison McConnell filed a Notice of Motion and Motion for Divorce Judgment, Contempt Findings, and Further Relief with the Pierce County, Wisconsin Clerk of Circuit Court on March 1, 2016.

IS FIELD McCONNELL A TARGETED INDIVIDUAL?

In the above referenced document, 27 statements are laid out.  #5 explains that Field McConnell had been “targeted by a ‘weaponized IRS’ beginning in December of 2014, and that “The targeting could only have been initiated by my sibling Kristine Marcy, and the person for whom she created a passport in 1994 utilizing the National Visa Center controlled by Serco, a British corporation.”

#6 refers to the IRS as a private corporation who “has threatened to steal or cause harm to my property after I advised them on 22 May, 2015 that I was revoking my election to participate in their fraud.” Thus it appears that the IRS probably is viewing Field McConnell as a potential Tax Protestor, which could lead to serious consequences, if that should be the case.

#8 states that “On 16 October, 2015 I became a Lien Claimant of an international commercial lien.  As a commercial instrument it has an S. E. C. Tracer Number of #2640220.”  You can read about this sovereign citizen commercial lien in this pdf taken from the Anna Von Reitz website. [link:  sec tracer 2640220].  To understand what some of the consequences, such as incarceration, are for the fraudulent use of such liens, read this article at pseudolaw.com , Is filing a UCC commercial lien a good way to enforce rights?

#10 explains that Field McConnell asked Alison to become familiar with “An American Affidavit of Probable Cause” written by Judge Anna Maria Riezinger.  Alison did not become familiar.”  This is one of several names which Anna Von Reitz uses in promoting her fraudulent schemes. For background information on this fake judge, the YouTube channel Virgo Triad has several videos which can be seen at this link: Fake “Judge”  Anna Von Reitz.

#4 says, “The Plaintiff in this fraudulent divorce proceeding has claimed ignorance of my duties as Global Operations Director for Abel Danger Global Private Intelligence Agency.  To help the Court understand the Truth, I submit these 5 items of my efforts to enhance the safety of global travelers in time frame 4 December, 2006 until present day, 28 June, 2016.  The Abel Danger Global Private Intelligence Agency will this day, 28 June 2016, be posting a Threat Warning regarding an aviation threat to Hillary Clinton.” 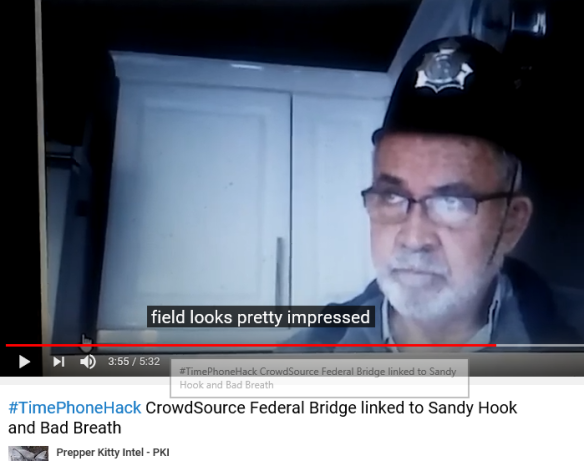 Field McConnell likes to wear many hats. He claims to be the Global Operations Director for Abel Danger Global Private Intelligence Agency.

After reading several pages which follow, I also claim ignorance of his duties.  So Abel Danger is a Global Private Intelligence Agency?

That title encompasses a rather grandiose objective.  However, if one looks into sovereign citizen “agencies” which are created by various persons who consider themselves as above the law and anti-government, it is not all that unusual.  It is not wise to laugh out loud at such pretensive titles, as I found out when I critiqued another global sovereign citizen. They responded by putting out an international notice of protest against my article.

#7 is Field McConnell’s “Lawful Notice to all Bar Registrants” which begins, “Hear ye, Hear ye, Hear ye, I am the Natural Man, and I am calling out your soul to hold you accountable for the many crimes you may have committed against me.”  The lengthy lecture which follows as well as the rest of this document is straight out of the Sovereign Citizen playbook.

There are numerous individuals who have attempted to use sovereign citizen “legal” instruments who found themselves convicted and incarcerated for fraud. Most persons who attempt to use these types of legal claims in civil or criminal lawsuits are cited at minimum for promoting frivolous arguments.

If you are interested in what this pseudo-legal maneuvering is all about, please read the links provided in this article, which are a starting point in understanding this form of paper terrorism against the courts and government institutions.  Increasingly, people who have degrees in higher education, or are highly skilled, are turning to these fraudulent legal schemes to escape personal property or tax issues in their life, without reflection on what the real life consequences are for fraud or failure to pay taxes, etc.  Please don’t become one of these, who later regret their actions when it is too late.