On December 22, 2012, the DailyMail.com.uk published an article entitled, Forget the Mayan Apocalypse, the new date for doomsday is January 1 2017, claim Sword of God cult.  Well as we know, Steve Quayle was one of those making money off of the 2012 doomsday scenario, and now we find that he is hosting an ad on SteveQuayle.com which features January 1, 2017 as the selling point for an e-book.  The strange thing of course is that the author of this survival book is sure that America will be hit by an EMP, which means you will not be able to read his book, if your computer gets fried. He gives a 60 day guarantee however, but since the author uses a pen name, you will probably not be able to track him down to get your money back. 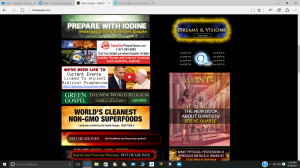 The ever changing Ad on Steve Quayle’s website. Better look before Quayle denies this promoter

The front piece of this ad ever changes, but it usually shows some news item, and encourages you to “watch this video”.  Today it proclaims, NASA’s 2015 Forecast includes Possible End of Civilization Disaster.  When I pushed the magic button I entered into the twilight world of Nathan Shepard and his website Survive the End Days.  I am afraid to give you the link, as this is a journey which is hard to back out of.  His video does have a pause button, but I could not locate the feature which allows you to go backward or forward in time, and his trailer is not a short one. However, if you are  curious, here is the link.

There is another page of this website which I found myself trapped in when I refused to pay $37 for his $97 e-book offer.  And why should I, when there are two comments on Amazon giving him a 1 star, because apparently there are no zero stars.  The unhappy e-book buyers seem to feel that one can find Nathan Shepard’s information offered for free on the internet, and it was also noticed that an EMP would zap this book out of existence just when you needed it.  When I refused to cough up the dough, the author begged and pleaded that I buy his e-book for only $26.  The author screams, STOP!  I will not be able to forgive myself if you just walk away empty handed…that is why right now I’m giving you a 30% discount…$26 for the entire Survive the End Days Program and it’s bonuses.  When I said NO, very politely of course, and tried to leave, up popped that screen which asks if I really want to leave.  Then it would not let me leave.  I ended up turning off my computer to get rid of that salesman who was on the ground holding my leg, begging and pleading me to buy his e-book.  When I turned my computer back on, I gingerly looked around to see if he was still there.  I did not see him, but he is still there on this link.  You have been warned.

So who is the author of The Survive the End Days e-book, and why does he not have a hardcopy of his work,  like Holly Deyo who seems to have written a real book called Dare to Prepare? I only say “seems” because I have not purchased her book, but all indications point to it as being a well written and in-demand book. While Holly Deyo uses her real name, Nathan Shepard does not.  Nathan Shepard is a Pen Name, and his self-proclaimed credentials cannot be checked, so why should we buy anything from this desperado? (As an aside, the author seems to think the word Holy is spelled Holly. Weird.)

If we convert the name of Nathan Shepard into Strong’s Concordance numbers, we arrive at a total which I will interpret as The Tongue of the Numbering Scribe of the Book of God.  So this hotshot has produced a video which is intended to produce the fear in us that something horrible will happen while Obama remains in office, hence the January 1, 2017 deadline.  Apparently Obama and the Pope are keeping a secret from us.  Now it should be noted that Nathan Shepard seems to think that the leaders of the church are Roman Catholic.  But since when did the Pope ever use a King James Bible??  So I start to suspect that the author is a real ignoramus.  Anyways, Nathan Shepard wants us to think that he will reveal to us “The only prophecy that has remained obscured under thick veils to this day.”

He says, “Obama will not finish his second term.  He is the 44th and last President of the United States.  Right now, only a handful of church leaders know the true meaning of this biblical prophecy.  And they swore a blood oath to take this sacred secret to their grave.  This ancient prophecy is coded within the visions of 4 men.  These Four Evangelists are John the Apostle, Jeremiah, Isaiah, and Ezekiel.”

Nathan Shepard throughout his video seems to have a penchant for screen shots taken from the History channel. That might explain his dubious scholarship. He asks us, “Does it not seem odd to you that America, the richest and most powerful country today, the only country who has liberated other nations from evil, the greatest evangelical nation on the earth, IS NOT EVEN MENTIONED IN THE BIBLE?”  Asking why the church does not teach any of this, he declares, “I will show you exactly why this knowledge is a closely guarded secret”.

Nathan Shepard portrayed by some anonymous person, I guess

“…the world leaders and their armies are covertly maneuvered into place in preparation for the events that lead to the Second Coming of Our Lord….this prophecy will come true before the 1st of January 2017.  And you will KNOW God’s wrath will be bestowed upon our lands with great vengeance.”

After giving us four scriptures to encourage us in our plight, he tells us that if we are reading this, it is God’s will that we are seeing his video. (The subliminal version probably says, Buy my e-book, buy my e-book.)  Now we come to the part where the author says, “You need to know just who I am and how I came into the position of revealing such shocking facts.  My name is Nathan Shepard.”  He claims that he has been a Christian from childhood, and has spent his life in the service of God, studying archaeology and theology.  For 17 years he “studied the ancient Scriptures”, and “as a pastor and teacher to one of the largest universities in New Haven, CT; using my worldly doctor’s degree in theology and the history of the religions, to save our nation’s lost souls.”  While he is telling us, the screen shows what looks like a large Roman Catholic Church where all are dressed in white robes.

Continuing, he declares, “Once I received Illumination about the place of the United States in Bible prophecy, I taught for 4 years the Masterclass for Religion:  Preparation, Challenges, and Possible Solutions, until one day by divine providence, I made a startling discovery that connected all the hidden clues”.  Now above this screen in the video he quotes Matthew 24:13, “But he that shall endure unto the end, the same shall be saved”.  The author says that he understands the metaphors and symbolism linked to Babylon or “Mystery Babylon”, which show it to be an end times nation.  Referencing the four prophets in the Bible who were “holy men who have heard the word of God”, he displays a photo of black robed priests.

And then he goes on to recite various scriptures to back up his claim that present day America is Mystery Babylon, and that Obama is the King of the South and Putin is the King of the North.  Like Dave Hodges, he envisions an invasion of America by the Russians in league with other nations, subsequent to an EMP attack.  All this lines up nicely with the prophetic assertions of  Steve Quayle and Doug Hagmann’s inner circle.  And we also receive the bonus of the Completely Anonymous Speaker Who Understands The Hidden Secrets of Future History. Nathan Shepard is another V, or W, or Rosebud in the making. And while one reviewer of this e-book video thought that the voice over was computer generated, it was surely more comforting than The Hawk’s voice.

Well, since the author seems to be a Numberer of the Scriptures, and I am Tracking Meroz, that Supreme Numberer; I wrote down all of the Scripture quotes and sat down to analyze this data.  Interesting, but problematic.  We are not told how all this fits in with the timeline given in the book of Revelation.  Now, I do not have a problem with identifying America as Mystery Babylon.  But in Revelation 16:19 it says, ” And the great city was divided into three parts, and the cities of the nations fell: and great Babylon came in remembrance before God, to give unto her the cup of the wine of the fierceness of his wrath”. I do not think you can cut out the scriptures which pertain to the fall of Mystery Babylon, and ignore the context of these verses in the timeline of history which is shown in the Bible.

Nathan Shepard quotes a portion of Isaiah 47:13, Thou art wearied in the multitude of thy counsels”, to back up his claim of America/Mystery Babylon being dragged down by a massive government system.  He fails to include the rest which says, “Let now the astrologers, the stargazers, the monthly prognosticators, stand up, and save thee from these things that shall come upon thee.”  In other words, he left out a key identification of the type of counsel which Babylon relies on in making decisions.  Perhaps this is also a key to identifying himself, or the real producers of this video. It is apparent that Nathan Shepard knows little of the Bible, despite his assertions of being a scholar.  In referencing Daniel 11, the author seems to have little knowledge of the historical fulfilment of many of these prophecies in the past.

Now we know that there may be some future references in Daniel 11 also; but Nathan Shepard’s reasoning as to why he asserts that Obama is the King of the South seems spurious at best. There is such a strange mixture of error in the video promoting his e-book, that it is difficult to address all the deviations in a blog post.  The author seems to be a liar of sorts, or maybe his doctorate was received from some fly-by-night university, and he is trying to recover his $97, or $37, or $26 cost of his degree.

But of course his greatest scholarly endorsement comes from  Steve Quayle, the Man of Meroz Revealed, who must think so highly of his work that he  is granted ad space on a website that gets around 1.2 million visits a day.  On another page of Nathan Shephard’s webpage, he has an offer where if you feature his promotion, you can get a cut of the action.  Now that would  certainly explain why there are so many phony book review sites “reviewing” his e-book.  Of course, every review is identical in wording.  Curiously they all answer the natural question of whether this promotion is a scam.  If you type in a search engine, Nathan Shepard Survive the End Days Scam, you will find out that Nathan Shepard has headed off the question of whether he is a scammer or not.  Of course he is.  Now let go of my leg, you Scammer!!  It will help to have a baseball bat handy if you decide to investigate Nathan Shepard.

UPDATE 2/23/2016  A reader of this article emailed me the following comment: